When it comes to selecting a server, there are four key components that must be taken into account: CPU, memory, hard disk, and RAID card. This blog post will go into detail about each of these components, what they are and how they work together to create a well-functioning server.

By understanding the role of each component, you will be able to better understand the technology behind server systems and make informed decisions when buying your own server. So let's take a look at the four key components of a server. 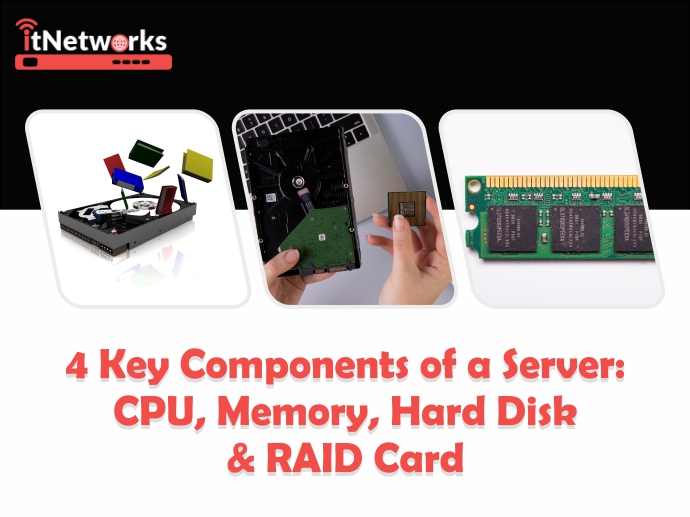 The CPU, or Central Processing Unit, is the most important component of a server. It is responsible for processing instructions and data sent to it by the operating system, application programs, and users. The CPU determines how quickly and efficiently a server can perform tasks.

A powerful CPU can dramatically increase the performance of a server, while a slower CPU will cause the server to be slower. When choosing a server, it’s important to select one with a powerful CPU that can handle all your computing needs.

The CPU also controls the functions of other hardware components in the server. It is typically made up of one or more cores, which are responsible for carrying out the instructions given to them. CPUs come in different clock speeds, which determine how many instructions can be processed per second. Higher clock speeds mean higher performance, while lower clock speeds may result in slower response times.

Memory is one of the key components of a server and is responsible for storing data and running programs. It's important to make sure you have enough memory for your server to run smoothly, as insufficient memory can lead to slow down and sluggish performance.

When it comes to servers, the more RAM you have installed, the better. This is because RAM provides faster access to data and programs compared to other storage solutions such as hard disks. Additionally, having more RAM ensures that multiple applications can run simultaneously without any lag.

It's important to note that RAM can be easily replaced or upgraded depending on the type of server you're using. However, if your server is low on memory and you're unable to upgrade, you can look into other options such as virtualization or cloud computing.

Overall, having sufficient memory is essential for a server to run efficiently and provide reliable performance. With the right amount of RAM, you can ensure that your server will be able to handle multiple applications at once with no slowdown or lag.

What is Hard Disk

The hard disk is a critical component of any server. It serves as the primary storage for all data and applications, making it a crucial element in any server setup. The hard disk can be either spinning or solid-state, each with its own advantages and disadvantages.

Spinning hard disks are the traditional form of hard disk and use magnetic technology to store data. They are usually cheaper than solid-state drives, but are slower and more prone to failure. Additionally, they are more vulnerable to physical damage and require more energy to operate.

Overall, the hard disk is a vital component of any server and provides the necessary storage for data and applications. The type of hard disk used depends on the needs of the user and the budget available.

A RAID card is a type of hardware component used in servers to help manage storage. It stands for Redundant Array of Independent Disks, and it allows multiple hard drives to be connected together in a single array. This can be used to improve both performance and reliability.

RAID cards use a variety of technologies such as mirroring, striping, and parity checking to enable data redundancy and performance optimization. This ensures that if one drive fails, the data can still be retrieved from another. RAID cards are an essential part of any server setup and should be carefully chosen based on the needs of the system.

RAID levels vary from 0-6, with each having its own advantages and drawbacks. Level 0 requires two disks, while level 6 requires four or more disks. RAID 0 provides better read/write performance but lacks fault tolerance, while RAID 6 provides better fault tolerance but slower read/write speeds. RAID 5 is a popular choice, providing a good balance between speed and protection.

A server is an essential part of many businesses and organizations and its components are vital for it to function properly. By understanding these key components, you can ensure that your server is running efficiently and securely. If you need to buy servers or you need help with the selection of the right server components for your network and devices, please connect with us via WhatsApp at +971585811786.